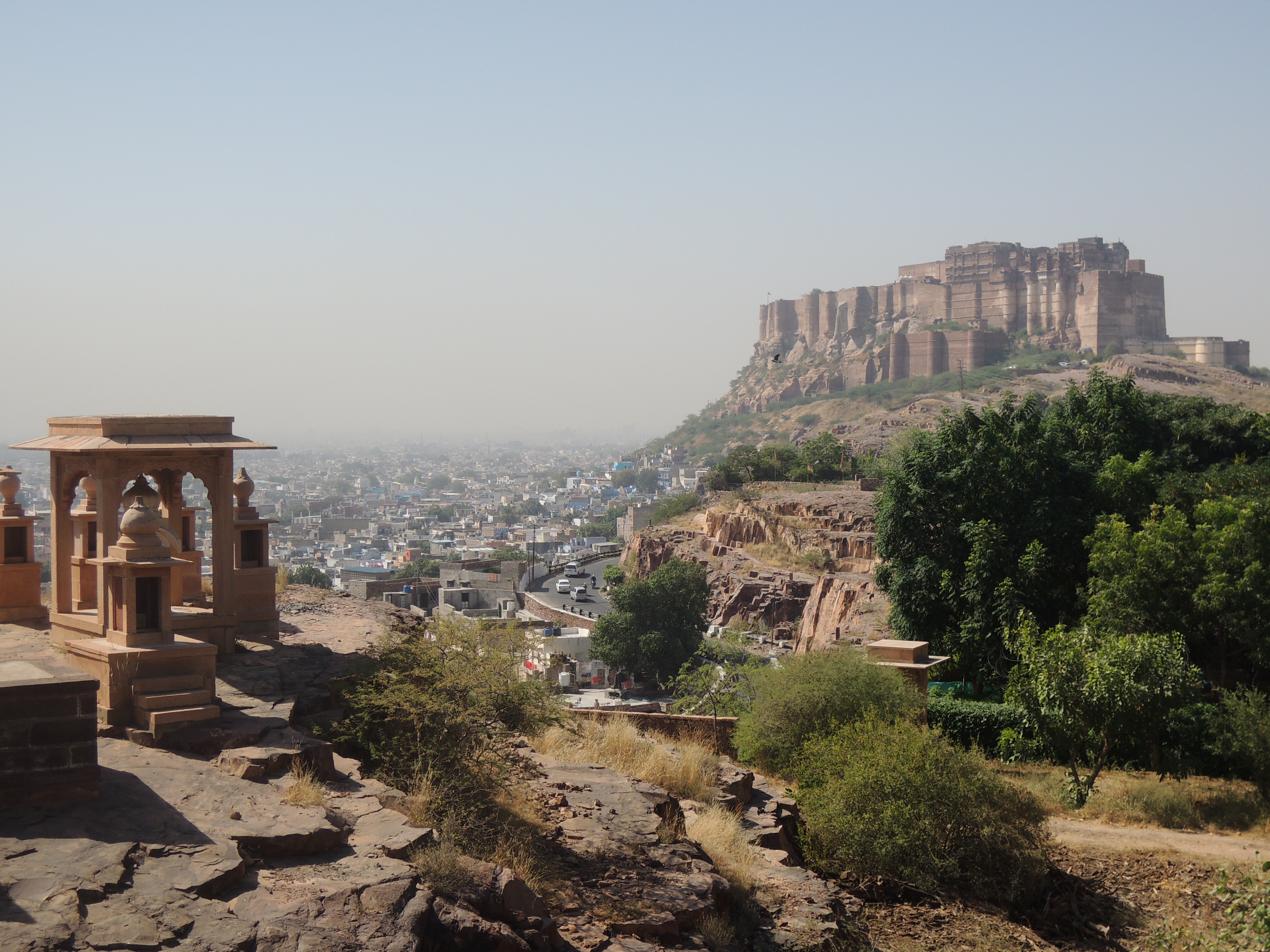 Few places in the world evoke the magic and the enchantment of a long lost era as Rajasthan. Rajasthan means Land of Kings and this is absolutely true for this province in northwest India. Here you can find palaces and temples beyond what your imagination can fathom. Come with us and join us in this round trip through desert, mountains, lakes and plains to the beauties of Rajasthan. But first, the question that you may be asking yourself before anything:

Is it safe for gay couples to travel in Rajasthan?

Rajasthan is a very traditional province in India, but is visited by many foreigners and is open to outside influences. Indian culture was, before British colonialism, more open than one may think. The existence of the hijras or third sex is still there to prove it, but in general attitude towards gay and lesbian love may be intolerant. However, India has recently (2018) decriminalised homosexuality, which gives hopes to the LGBTQ Indian community.

We traveled in India with a female friend and even though this deviated the attention from us as a gay couple, we had to face funny questions such as why 3 unrelated adults were traveling together. We strongly recommend to travel in groups, small or large and avoid public displays of affection. This applies to heterosexual couples as well.

How to reach Rajasthan?

Rajasthan is very close to Delhi, the capital of India, which is one of the most common aerial gateways to the country. The capital of Rajasthan is Jaipur, part of the famous Golden Triangle, together with Agra and the fore mentioned Delhi. The Golden Triangle is a very popular trip that tourists make in India, but there is definitely more to Rajasthan than just Jaipur.

Usually many tourists arrive first to Jaipur, either from Delhi or from Agra. It is connected to both cities through railway and highways. Trains bounded from Delhi to Ahmedabad or from Delhi to Jaisalmer stop in Jaipur. You can use the website https://www.railyatri.in in order to find timetables or book tickets and not only for trains but also for buses, which can be another option of getting to Jaipur.

If you come from Mumbai by road the most common way to enter to the state is from the south, from neighbouring state Gujarat, most probably the city of Ahmedabad. The first major city to be found in Rajasthan from this direction is then the beautiful lake city of Udaipur.

There is also a international airport in Jaipur (JAI) and a domestic airport in Udaipur (UDR) which can be used to enter into the state of Rajasthan. Most national operators provide flights from these air hubs to the major cities of India such as Delhi, Hyderabad and Mumbai.

How to get around in Rajasthan?

You can use the train to move from one city to another. However our recommendation is to hire a driver who can take you around without the hassle that involves the buying of tickets and waiting the unreliable schedule of trains.

What to see in Rajasthan?

We will cover Jaipur in an upcoming article about the Golden Triangle. So therefore we will focus on the other cities and attractions that comprise Rajasthan.

The “Blue City” of Jodhpur has a wonderful bazaar where you can find any textile, garment, spice, utensil, food or book. The bazaar also has a clock tower present since the 1800s which can be seen from all corners. On the streets close to the bazaar there are even more spice shops that sell pepper, cardamom, garam masala and other types of condiments. It makes the air around the market to be impregnated with exotic smells and fragrances.

Jodhpur is also home of one of the most expensive hotels in India, the heritage Umaid Bhawan Palace. Located on a hill, the marble-built complex is part hotel and part residence, still habited by the family of the lord that ordered its construction. The place, with its gardens and beautiful ornaments is a must-see.

Places to eat abound in Jodhpur and one of them, which was the best place we found in our trip across Rajasthan was On the Rocks, an open-air restaurant with plenty of vegetarian options that fulfil the wishes of tourists in general. We recommend to try the Gulab Jamun ki Sabzi.

The colossus dominating the city and that attracts all the sights is the Mehrangarh Fort. It is a humongous mass of stone and an impressive achievement of rajasthani architecture. You will not find higher walls in this part of the country. Rudyard Kipling called it “the work of men and angels”. Centuries ago the lords of Marwar decided to move their capital to Jodhpur and to build a fortress in the rocky mountain. But first they had to evict a hermit that lived upon this mountain. This hermit, not happy with the lords’ decision, cursed the fortress by saying that water would always be scarce there. The lords of Marwar could not take such a curse lightly, above all in a region surrounded by desert, so therefore sought advice from the wizards of the kingdom. They said that the only way to palliate the curse would be a human sacrifice. A brave man, called Raja Ram Meghwal, stepped then ahead. He was buried alive in the foundations of the fort. Thus, his death broke the curse. In exchange, Raja Ram Meghwal’s family lives until today under the protection of the State.

Why is Jodhpur called the “blue city”?

Contrary to what you believe, the entire city is not blue. The blue citadel is just a small neighbourhood in Jodhpur, where the houses are painted in a vivid blue tone. No one knows exactly the main reason but most probably the brahman caste was the first and only one allowed to paint their houses blue to distinguish them and advertise their wealth and influence. With the turn of time not only brahmans but everybody wanted their house to be distinguished, so it ended up with all houses being painted blue. You can gaze the blue citadel in its full splendour from the walls of Mehrangarh Fort, specially near the Chamunda Temple.

This is a special place for film-freaks. I am talking about the staircase well of Chand Baori, which is an example of dreamlike architecture. In this out-of-your mind location Tarsem Singh filmed one of his wonderful shots of the film The Fall.

Famous for having the only temple devoted to Brahma in the whole of India, Pushkar is worth seeing because of this temple, the Pushkar lake, the ghats around the lake and the camel fair that takes place yearly around October or November.

The walled city of Jaisalmer is usually the starting point for camel safaris going into the vast Thar Desert. This is an unforgettable experience in which you spend a night outside, with the starred sky as your ceiling. Highly recommended.

On the Aravali hills near Udaipur, you can find another delightful example of rajasthani architecture: the jain temple of Ranakpur. Get lost in its alleys and contemplate the marble graving and decors.

The lake city of Udaipur has a weather different than the rest of the Rajasthan major cities. It is more humid and you feel that you have arrived finally in tropical India after so long time in the desert. Udaipur has many things to offer specially the Queen’s Gardens and the City Palace. The city has a laidback feeling to it, given that is the closest city to Gujarat where alcohol can be bought (Gujarat is a “dry” state: alcohol sale is forbidden). Unmissable is a boat trip through the lake Pichola. The boat will take you around the islands of Jag Niwas, where the Lake Palace Hotel is located (James Bond film location) and Jag Mandir, which is open to the public.

What is the most beautiful city in Rajasthan?

This one is a typical question done by travellers before going to India. It is impossible to answer definitely since many people have different tastes and the impressions vary from one person to another, even depending on the time and experiences you live on a given day. However, I can say that my personal favorite is the lake city of Udaipur. The beauty of the city palace and the lake Pichola, with the multiple gastronomic options and activities make of this city a true jewel. In spite of that, I encourage you to travel to Rajasthan on your own and discover your personal favorite!