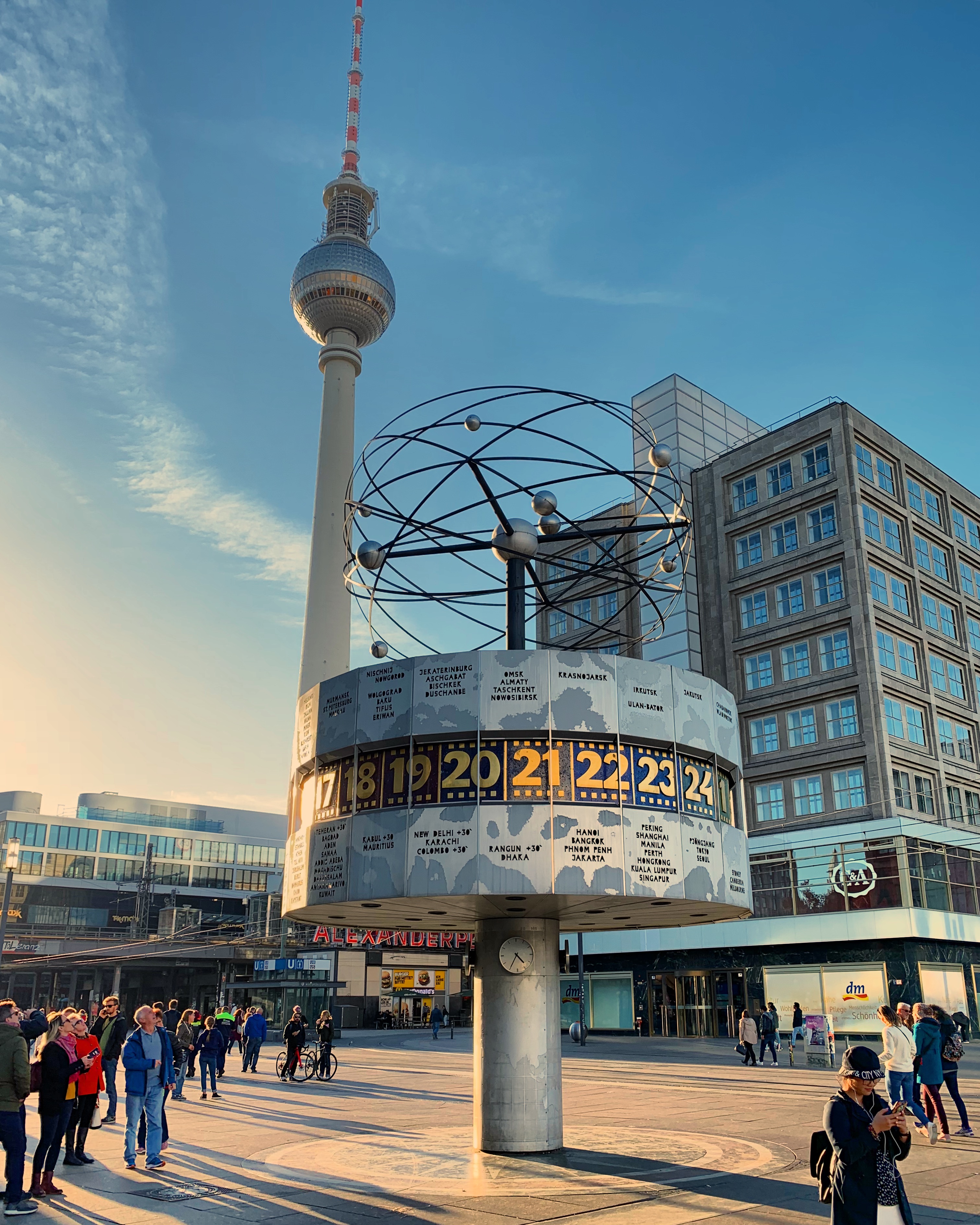 Many people know what BB is, but only few have done it this way. Of course I am talking about Basic Berlin, a flashy 1-day sightseeing tour where you get to see Berlin Highlights and every important monument/place that the old folks back home always ask if you have already visited them. This is the hard stuff tourists are looking for… However, once you’re done with it, you can concentrate in exploring your own personal interests. At the end of these paragraphs, you will find a helpful map with the highlights.

Firstly, start your sightseeing tour at Alexanderplatz and get the feeling of the iconic square. As you’ve probably heard, Berlin lacks of a proper “center” or “downtown”, due to its divided and convoluted history. Anyway Alexanderplatz is still pretty much the closest that East Berlin has as a center. Check the World Clock, the Television Tower (Fernsehturm) and the different shopping possibilities.

Then go to the S-Bahn station (there is one right there at Alexanderplatz) and head to Ostbahnhof (German for East Train Station). Once there go out  to the Mühlenstraße and you will find the world famous East Side Gallery. Here, during 1990, different artists painted what their hopes and dreams were after the fall of the Berlin Wall. Tip: Check the latest addition: a stencil by Banksy!

Continue your sightseeing tour watching the whole open-air gallery until you reach another city landmark: the Oberbaumbrücke. Walk through its arcades over the Spree river and reach the neighbourhood of Kreuzberg. Careful: here starts hipster territory. Then, after checking the kebabs and falafels, quickly head to Schlesi (Schlesisches Tor) and take the U-Bahn there (U1, green line) direction Uhlandstrasse, stop at Kurfürstendamm.

Ku-damm (Kurfürstendamm) is the high-end shopping street of Berlin and has many flagship stores ranging from Armani to Zara. Take a quick look and then head to Breitscheidplatz, easily recognizable by the Kaiser-Wilhelms Gedächtniskirche. These are the remains of a church that was never reconstructed since it was intended to be left like this so everybody could remember the destruction of war. Check Bikini Berlin, one of the hippest shopping malls and then go up to the terrace of 25 Hours Hotel and enjoy a drink and a small aperitif at Monkey Bar. Above all, the views of the city and specially of the Zoo and Tiergarten are fantastic from this terrace. Tip: try and delight yourself with one of Monkey’s Classics (cocktails), you will find them on the menu.

After one (or two) tonics, speed up things and take the bus 100 directly at the Breitscheidplatz. This bus takes you to the “big” things you have to see in Berlin. Hence, my advice is to drive with it pass the Großer Stern where the Siegesäule stands, then further by Schloss Bellevue until you reach the Reichstag. Here you can stop and continue the rest of the sightseeing tour by foot. If you decide to stay on the bus, it will drive then until Alexanderplatz. The best thing about the bus is the price: you get a very nice sightseeing tour for 2,80 € (the single bus fare – November 2018). Tip: be quick and grab the front seats on the upper deck!

Once you reach the Reichstag, take the mandatory photo of the building and its glass dome made by Norman Forster – the building, around this time of the year, also has a Christmas tree. Less than 200 meters to the right you will also find one of the most recognizable icons of Germany: the Brandenburger Tor. This gate stands where the border between East and West Berlin was. Once you’re done taking a photo of the most famous quadriga in Europe, continue walking south and you may discover the Memorial to the Murdered Jews of Europe: get lost in the labyrinth of monoliths and experience the feeling of oppression at the very center.

Find your way out and then walk through Hannah Arendt-Straße which quickly transforms into Französische Straße. Here is the “Mitte Schnitte”, where expensive hotels and restaurants stand together to touristy souvenir shops, specially in the Friedrichstraße. Pass by Galeries Lafayette until you reach the fabulous Gendarmenmarkt. This square is very different to the idea one may have about Berlin, but is nevertheless astonishingly beautiful. Check the almost symmetrical French Cathedral and German Cathedral, opposite to one other, both ordered to be built by legendary – and queer – Frederick the Great.

Go back to Französische Str. and continue your sightseeing tour until you reach the Hedwigskirchgasse, turn left and walk north to Bebelplatz. This is the university square, where during the Third Reich books considered “degerate” were burned. Check the Hotel de Rome, the most expensive accomodation in the city.

Stroll down Unter den Linden, checking the Opera and the different Museums until you reach again the Spree. The fantastic view of the Berlin Cathedral and the newly reconstructed (still in work) Berlin Palace will hold your breath. After crossing yet another bridge, to your right you find an almost hidden sculpture of handsome fellows Karl Marx and Friedrich Engels. Most importantly, they were the forefathers of the political system that ruled half Germany for more than 40 years. A couple of steps ahead, after reaching the Neptune Fountain, you reach again Alexanderplatz and the tour is completed.

As I said, this is the stuff tourists pay and travel for. Therefore, consider this as the homework to be done. Once you’ve done with it, you can move to other specialized Berlin sightseeing tours such as discovering the gay past of Schöneberg or the multicultural life of Kreuzberg and Neukölln. Do not forget to check the map for gay bars and clubs in Berlin. Take care and until next time!